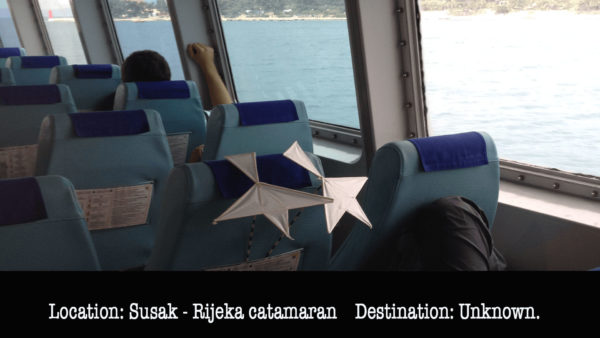 Of a tally of 28 birds that arrived on the evening of 4th May from South London, England – three were lost through catastrophic injury.

Six flocks, comprising of either three or five birds were photographed nesting in various locations around the island.

An initial flock of five located next to Susak Steps on the evening of 5th May were reported missing on the morning of 6th May, however one was found injured nearby and returned to health. A short time later another flock of five were spotted in the same location.

No obvious signs of hostility by native species was observed, however adverse weather conditions (wind and rain) could affect survival rates. Removal by predator also remains a possibility. The behaviour of the visiting birds was described as benign.

On the morning of 6th May two birds were sighted hitching a lift on the Susak-Rijeka catamaran, destination unknown.

On the afternoon of 6th May in the location of Tijesni it was reported that a great white bird (unidentified species) flew briefly, chaotically and with little grace, seemingly caught in a gust of wind, before disappearing from sight.

Previous PostDiving for SentinelsNext PostBack in my studio in London