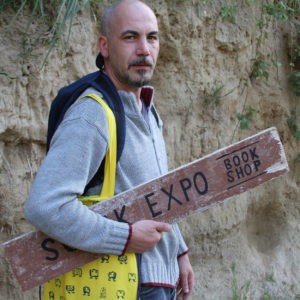 Sometimes people see those awkward cars driving around their towns while taking 360 Google street view pictures. People in Susak will have that same experience as well: an awkward vehicle will drive around their streets for couple of days or weeks, and soon they’ll see 360 street views of their home-place uploaded on Google maps.

Whether it is a proud experience of inclusion in the wider database of the World or the upset of feeling spied even at home on a remote island of the Adriatic sea, it’s hard to tell. The ambiguous feelings that new technology arises, especially in relation with a remote, untouched and idyllic place such as Susak, is the topic we aim to investigate.

Gianfranco Mirizzi is a visual artist living and working in Rijeka, Croatia.

He works with digital arts, architecture, sound and performance to articulate immersive interactive and self generative environments, in which the viewer must participate in order to create and complete the artwork. His works have been seen in a variety of settings in US (Washington DC, Baltimore, Towson and Salisbury) and across Europe.

He has been working in a number of video projects, collaborating with such artists as John Sturgeon, Fred Worden, Lee Boot, and Steve Yeager. He has been an assistant researcher at the UMBC’s Imaging Research Center (https://www.irc.umbc.edu), where he was responsible for media production and postproduction. At the IRC he collaborated in a number of research projects focused on social and urban themes, producing films, documentaries and video-interviews.

He’s been engaged in an international artistic research on games, within the European art platform Corners of Europe (http://www.cornersofeurope.org/), performing in Taranto, Newcastle, Rijeka, Ljubljana, Maribor, Zagreb and Durham.

He’s founder of Rijeka artistic organization ArtTeatar BOUM! in which he serves as director of the new media and digital arts program.